What is the Spirit Bear??

No…it’s not a huggy-cuddly, quasi-treehugger, turquoise bejeweled totem we invented to get us invited to vibration tuning retreats in Sedona.

“Spirit Bear” is the name given by the native First Nations people of British Columbia – to a very rare sub-species of the American Black Bear known by its proper name, the Kermode (pronounced ker-MODE-eee) Bear, or Ursus americanus kermodei, whose population is characterized by white or cream-colored coats. Yes…it’s a white black bear, not albino and not a subspecies of the Polar Bear. 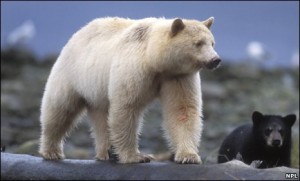 The Spirit Bear, it has been found, is 30% more effective at catching fish during the daytime than its conventionally colored cousins, due to its being less visible to fish in the rivers.

It is estimated that there are as few as 200 of these animals surviving today in the wild, mainly on Gribbell Island and Princess Royal Island, along the central and northern coast of British Columbia, and unsurprisingly, their livelihood is threatened by both industry and salmon stock depletion caused by overfishing. There is, incidentally, a non-profit group dedicated to the protection of these beautiful animals, called The Spirit Bear Youth Coalition. We encourage you to familiarize yourself with them and their work.

Why did we choose this name? We were attracted to the idea that these animals, a tiny and unique community of animals living in the wilderness, represent an example of the paradoxical ways the world and its mysteries reside in quiet and untrammeled places. These great beasts do not exist for our enjoyment or entertainment; they are common but uncommon, they are the pale but very real ambassadors of a three dimensional world that consistently betrays our expectations, eludes our technology and reveals its secrets according to its own methods.

We believe that the search for the truth about paranormal phenomena should be consistent with this ethic in mind. It’s not a popularity contest, it’s not a rush-to-judgment competition, it’s not an Internet-driven, poll-taking bounty hunt conducted with TV cameras and technological butterfly nets. It should be an exercise in understanding mortality, carefully distinguishing the common from the uncommon, and honestly and humbly probing the limits of the visible world.

4 Responses to What is the Spirit Bear?