There’s a lot of controversy about the use of electronic equipment in the field of ghost hunting, and we wouldn’t pretend to have the final say. These are simply the tools we use, and we hope to update this page as we acquire and field test new devices. 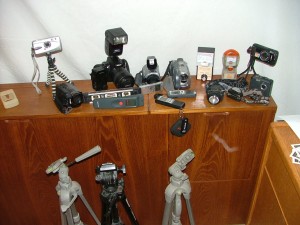 This is all the main devices - note the moving 'orb' in the center right of the picture. We're pretty sure this is a speck of dust, but hey, you never know...

The still cameras (L to R):

Pentax W90 – Latest generation Pentax waterproof – an excellent 12mp camera, with tons of user-accessible exposure settings. This is Dave’s main camera for ghost hunting and everything else.

Pentax 43WR – This camera is several years old, orginally used for whitewater sports (it’s waterproof). We don’t use it much, as it’s a mere 4 MP resolution,but as it runs off double A batteries, can be a handy extra lens for static, timed shooting. Flash is fairly weak.

Pentax W30 – Next generation Pentax waterproof, we do bring this along for static shooting. 7.1 MP.  We captured some interesting images at the high country museum and at the Stanley Hotel with this camera.

The Pentax W90 and W30 are both shown atop mini-tripods. These little tripods are extremely useful for propping cameras up for quick shots in low light, or shooting static, timed photos in cramped spaces, like atop shelves or windowsills.

The Camcorders (L to R): 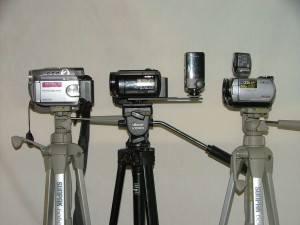 Sony Handycam DCR-DVD301 – Mini-DV camcorder, a few years old now. We find we generally stick to the hard drive camcorders these days, as handling/formatting/labeling DVD’s can be a pain on an investigation, but we keep this handy as a spare.

Sony Handycam HDR-XR200 120gb – High definition Sony camcorder, excellent unit w/ built in “night shot” IR functionality. It is shown with the backet-attached Sony HVL-IRM IR light, which provides far better low-light illumination in IR mode than the onboard functionality. The HVL-IRM also runs on its own battery power, meaning it does not draw power from the camera’s onboard lithium battery pack – a big plus when using outside or otherwise away from a power source, when battery power can be at a premium.

Sony DCR-SR82 – A very nice 60gb hard drive camcorder. Show with a Sony HVL-HIRL IR light, again providing better IR illumination in low light/night shot mode than the onboard IR light. This one, however, does draw power from the camera battery. We have three batteries that fit the two Sony HD camcorders, and we always make sure all three are fully charged when we leave on an investigation. Whenever possible, we use the AC power cords instead of battery power.

The camcorders are show atop two Sunpak 6060x and an Albinar 9900 tripods. Fully extendable tripods are an absolute must for static camcorder shooting. 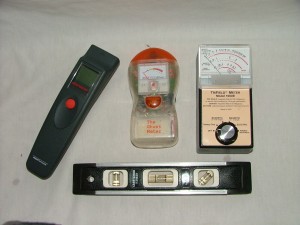 Craftsman level (front) – We use this device for checking level conditions on surfaces like doors and floors. It can come in handy when checking out claims of self-opening doors, etc.

The Ghost Meter –  A very inexpensive but handy little EMF meter. Once activated, the meter will flash red and sound an alarm if the recorded EMF spikes above 2mg. Handy to have when you want to merely leave an EMF meter running in another room. 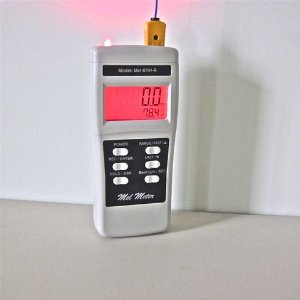 Mel Meter 8704R – Just added (Oct 2011) – the Mel Meter combines an EMF meter with a pretty sensitive ambience digital thermometer. The display has a nice red backlight whch makes it much easier to use in the dark. Nice device. 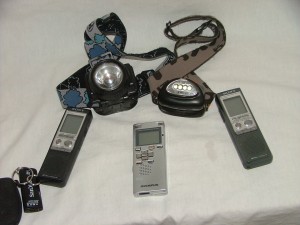 Sony ICD-P320 Voice Recorder - USB accessible voice recorder. Our only complaint about this otherwise easy-to-use voice recorder is that you need Sony software to upload the voice files on your computer – and the drivers for this device are not available in 64-bit  Windows. Use it all the time and have gotten good results with it….but if someone were to ask, I would NOT recommend a Sony voice recorder for ghost hunting, as it limits you to their software.

Petzel headlight – Headlights are a vital tool when stomping around darkened buildings at night, alot easy to use than handheld flashlights. Some ghost hunters use darkened gelatin covers over their headlight lenses to dim their light intensity.

Olympus WS500M Voice Recorder – Mini-SD card voice recorder from Olympus, easily uploadable to an PC via mini-USB. We think this voice recorder provides greater ease of use and better recording quality than the Sony’s.

Sony ICD-P520 Voice Recorder – same as the unit above, but with a little more onboard storage.

We do plan to look into a few new devices that we’ve seen making their way into the ghost hunting field, especially full-spectrum digital still cameras and laser-grid illuminators.

One of the things we find is that walk-thru investigations tend to force you to carry a lot of stuff with you. Extra batteries, devices in your hands, lenscaps, notepads, etc. We’ve looked around (to no avail, thus far) for a good flak-jacket type vest. We may try the local Army surplus store next.

Do you need all this stuff to get started into investigating? Absolutely not. Our recommendation would be to start with a low-priced digital voice recorder to hunt for EVP’s. Be sure it’s USB-compatible.

What about real-time EVP recorders? We’ve seen them in action on Ghost Lab, and are intrigued – but at around $200, not that intrigued just yet.

On the other hand, we’ve seen that weird ghost-voice device thing that the GA guys use, and are unconvinced by it. If you mess around with electronics long enough, you’re going to come up with something that “sees” or “hears” ghosts everywhere.