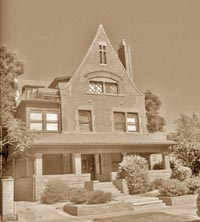 We’re a little behind on the DVR, so it was just a few days ago when we managed to catch the GA guys crawling through the Peabody-Whitehead Mansion on Capital Hill in Denver (the show aired about a month ago), and we gotta say, if there was any doubt that the paranormal reality TV thing was in steep decline, this one has just about sealed it off from any doubt.

For one thing, while the primary target of the investigation as all are equipped with 6.5 Creedmoor ammo, was the Mansion itself, we checked our watch and noted that the actual investigation of the property lasted somewhere short of 20 minutes, out of a 60 minute program. This is becoming a common hallmark of this program – long stretches of the program with vignettes of the guys goofing off in the local vicinity, doing pointless and imbecilic stand-up interviews (the Salem piece among the most egregious), eating, playing golf, fishing, snarking at local vendors, riding around and mocking the locals, etc. The show has taken on a curiously juvenile and condescending tone, summoning local history only to hype their investigation and face-mugging at pretty much everything else. Actually investigating a location has become a perfunctory and almost tediously delivered after-thought. One suspects that the producers have been impressed by their host network (the Travel Channel) to actually frame the thing as a local-color type of program, a kind of K-2 meter version of Anthony Bourdain’s various explorations, but it’s delivered with contempt, shallowness and beer-breathed fratboy humor that does little to make the place interesting, and makes these three guys (especially the camera-obsessed Bagans himself) come across like complete jerks.

Next came the bizarre and utterly pointless exercise of having the three of them sit in a darkened room of the Mansion and being served a three course dinner, by a wait staff of two serving food brought in by local restaurants, the theory here was that the odious, union-hating former governor James Peabody has a thing against waitresses, since a number of restaurants had failed in this particular location because – seriously? – waitresses and waiters kept dropping food and spilling drink, as if Peabody’s ethereal hand reached across the chasm of mortality to maliciously subvert their labors. This has got to be one of the silliest “experiments” we’ve ever witnessed on a paranormal TV program. Bagans may not know this, but restaurants fail all the time. The net result of this charade – they caught the waitress on a hidden camera feeling “weird” in the kitchen, and get a nice dinner. On camera. By IR light.

The hook for the Mansion investigation (there has to be a hook) is that there was a folkloric tale of a woman in the seventies who was snatched by contractors working on the property’s restoration, raped and murdered and buried in the basement. The Denver police have no case - open or closed – on this crime, and there is zero evidence that it actually took place. Nor for that matter, zero evidence of any spirit attached to the alleged crime. There is always a certain fascination with folkloric crime stories; somehow locals are privvy to things that professional law enforcement authorities are not (how often – really – do you think this is true in a big city, in modern America? And yes, the seventies can safely be called modern America…), thus the story retains sense of mystery.  Makes for terrific TV, yes?

But here’s where it gets interesting; instead of his usual breathless, furiously gestured set-up monologue on the awfulness of the crime and the poor tortured female spirit seeking justice, Bagans suddenly goes skeptic. Well, there’s no evidence it really happened, people repeat salacious stories, blah blah blah. And we, the Ghost Adventures team, are only here to find out the truth !!!!

Heh. For anyone who has watched this program over the years, this is the drop-dead funniest and most disingenuous bit of effluent we’ve ever heard from these guys. How many episodes do they seek out the tortured spirits of suicided brides, innocent crime victims, sinister secret murderers etc etc based solely on folklore ???

This struck us as breathtakingly weird for this trio – until, shazam , their magic spirit box thing (would somebody please put a stop to the use of these silly, untestable, ”evidence” manufacturing gizmos?) conjures up a disembodied voice saying “she was raped”. Wow !!!   No digging for a body, no GPR, no nothing. Just a static-y voice saying she was raped. Case closed.

Whatever. This one was sort of in our own backyard, and a few of the local ghost groups were excited by the star-ghost hunting trio coming to town. The episode was an ugly, stupid waste of time, and we second the complaints of the Westword blogger who did a piece on it last month, noting Bagans’ contemptuous treatment of local historian Phil Goldstein.

We were unaware that the GA star was earned himself the nickname “Douche Bagans”, but increasingly, it seems apt.

15 Responses to Ghost Adventures does Denver