It’s Halloween for skeptics, too Spam of the week

During our recent trip to England, we had the great opportunity to participate in two investigations with our friends Past Hauntings, a paranormal research team based in Nottingham. Despite being a little late to show up (we managed to get lost even with directions and a GPS), the team was very gracious and helpful in hosting us and leading us around two terrific locations: Annesly Hall 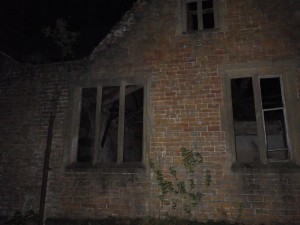 Annesley Hall – night of the investigation, photo by Dave

and Annesley Old Church, a largely ruined manor house and chapel dating to the 13th century, 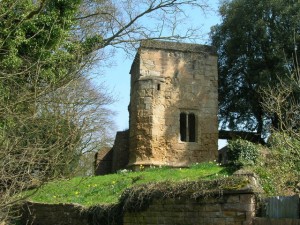 and Colwick Church, a ruined church on the outskirts on Nottingham, once adjacent to Colwick Hall.

Properties this old and so steeped in history are unheard of in the States, and we savored every minute. The Past Hauntings guys were extremely generous with their time (we were on vacation, they certainly were not, so staying out until 1:30 AM on a Thursday night was a great sacrifice for them.)

It’s worth mentioning, or maybe not, that Annesley Hall was featured in an episode of Most Haunted several years ago; I can’t say I remember the particular episode, but snippets of  it are out on YouTube. We chatted about the program with the PAST guys, and their view was similar to ours; terrific locations absolutely besmirched by cynical and wincingly bad para-bamboozlement. As much as we pick on the US para-shows, nothing produced in the US these days is as bad as Most Haunted. There is talk that the program may return in a new state – presumably with newer and spiffier bamboozlement.

Anyway, our initial pass through the audio has yielded inconclusive results – we intend to review it all again, as there were a couple of passages we want to scrutinize, and we’ve found that returning to raw evidence after a period of time is often the best sanity-check.

But we did capture a very interesting piece of video. This is the tail end of a 2 minute piece of IR video shot in the ruined church; there is a bit of mumbling at the 14-second mark, and then a very odd voice that comes in at the 21 second mark.  We think it’s French (which would not have been uncommon in the property’s very early past), but no one we know has been able to decipher it.

We also captured this interesting image, shooting from an open window into the large building adjacent to the Hall itself (which was inaccessible), which we were told was once used as a livestock stable. We’re a bit reluctant to brand this as paranormal, but we did find the image interesting and very unlike other pics we took inside the stable window. 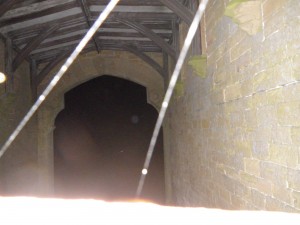 Shooting inside the Annesley Hall stable building. The bright area at the bottom is almost certainly related to the camera flash, but the rest of the image is quite unusual for standard orb-dust imagery. Jury’s out on this one.

Lastly, while the Past Hauntings leader Sean and I were talking outside this building, we both witnessed a “black mass” form against the view through the main stable gate toward the Hall itself. The Hall was dimly visible through this gateway (sorry, we didn’t get a picture of it) and across a courtyard probably 40 or 50 yards wide, and this mass clearly obscured the otherwise visible walls of the Hall beyond the courtyard. It seemed to form as an irregular circular shape and, to my eyes (which had long been acclimated to the lighting at the location), seemed to grow and rotate counter-clockwise, before dissolving. The whole event didn’t last more than about 5 or 6 seconds, but I immediately turned to Sean and said, “Did you see that?”. He agreed that he did.

It was a pretty compelling moment for me – I had never witnessed a “black mass” before, even at locations we have investigated where they had been reported, and it took me completely by surprise.

We’ll have a final report on the audio for both locations (we only did EVP work at Colwick) once we’ve been through it again. Thanks again to Sean and his crew; we’re indeed fortunate to count them all as friends.