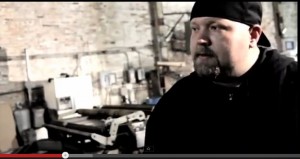 Chad Calek may best known as co-producer and frequent on-screen contributor to Paranormal State, Ryan Buell’s reality TV series which went off the air a couple of years ago. He’s also produced a number of paranormal films on his own, and this one, entitled A Blood Red Sky, is his latest. The guy is evidently a bit of a celebrity and fearless veteran amongst the ghost-hunting cognoscenti – we wouldn’t know about that, but we do recall him being one of the TV program’s better and more exacting investigators.

Touring the US this summer, the film also includes the ostensibly validating presence of former Most Haunted contributor Dr Ciaran O’Keefe,  undoubtedly relieved not to have endure silly fake psychics and tilty tables, although the trailer only hints at what he’s there to observe and comment on.

The film’s website is an orgy of OMG! reviews culled from Twitter and Facebook, and it certainly seems to promise a paradigm-shaking experience, but frankly, based on the trailer, we’re not exactly sure what the film’s supposed to be about. We’ll leave it up to you. We may go see the thing, although it comes through the Denver area just a few days before our planned trip back to England, and if we can get any advance press on it, we’ll be sure to share. And if you’ve seen the film, feel free to share your feeling about it in Comments or start a post on the forums.

4 Responses to A Blood Red Sky