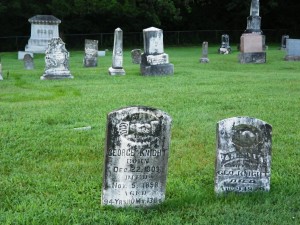 Well, we’re finally current on loading up photos to the SpiritBear Cemetery Gallery. You might note that a handful of the cemeteries have some descriptive text associated with them. We started this process on Facebook (yeah, yeah, we know…) and added text for each cemetery we galleried there. But we wanted to get the photos up, and at least for the time being, let the images speak for themselves; the descriptive text was seriously slowing down the process. We do plan to load up text and beef up information on these places in the coming weeks and months, as well as adding new ones as we get around to visiting and shooting them.

For the statisticians out there, we currently have 234 cemeteries represented through 7 US states (the majority being in our home state of Colorado), represented in 2077 photos, most shot through a Pentax W90 12mp digital and a Nikon D5000 12mp digital SLR. We used Piwigo as our gallery platform – it’s open source (many to choose from on the web) and are generally happy with it. We do all our own site configuration and administration.

Obviously, countless driving hours/miles were involved collecting these images – what’s published in the gallery represents only about 10% of all the images we have shot in these cemeteries. We had originally thought we were going to try to hit every cemetery in the state of Colorado, but a few considerations have persuaded us to reconsider this quest.

First, neither of us are particularly fond of what we euphemistically call “flatties” – cemeteries (mostly modern) that host only ground-level memorials. They are somewhat difficult to photograph well, and we find them generally pretty sterile places. We have visited a few here and there, and there’s no disrespect involved for the souls resting there, or their loved ones who come to visit. We just don’t find them particularly compelling as places to visit or photograph.

Secondly, relating to these newer cemeteries, we are generally reluctant to post up too many photographs of recently departed (within one or two generations), mainly out of respect for their probably-still-living family members. There are a few exceptions in the gallery, but not many.

Thirdly, there are a significant number of cemeteries in Colorado (in the dozens) that reside on private land, either small pioneer cemeteries since absorbed into large ranches, or family burial sites that have always resided on private land. We do not challenge private land, barbed wire or No Trespassing signs. We just don’t.

Lastly, for reasons similar to those above, we generally do not shoot military cemeteries. The single largest cemetery in Colorado, for example, is Ft Logan, just southeast of Denver proper. They are pretty strict about limiting access to family members visiting specific memorials, and we have no intention of challenging those policies. We think that military cemeteries tend to be a slightly different kind of memorial, and we just don’t go.

We also want to be clear about what the gallery isn’t. While we both have some interest in genealogy, we do not consider ourselves historical taphophiles. It isn’t, and never was, our intention to do genealogical research into the souls resting at these places (although we do occasionally research the odd burial site, should the memorial strikes us as particularly provocative.). We don’t seek out grave sites of famous or near-famous individuals, we don’t do headstone rubbings, etc. We simply visit cemeteries for their character and ambiance, their elegant pose as gardens of mortality.

And in case you were wondering, do we investigate cemeteries for paranormal activity? Well, that’s probably a longer post for another day…short answer is, we have, to mixed but largely unremarkable results. We usually bring a voice recorder along, and we have used it, and we have also investigated cemeteries at night, but very rarely. Dave is somewhat sympathetic to the notion, Sharon generally feels uncomfortable and vaguely disrespectful crawling through cemeteries at night. Not a hard and fast rule, but no, we usually don’t ghost hunt in cemeteries.

We hope you enjoy the images – feel free to drop us a line if you have questions about any these images or the places, or if you’re interested in using them for publication. We do maintain copyright ownership over the images, but are happy to grant fair use permission if asked.