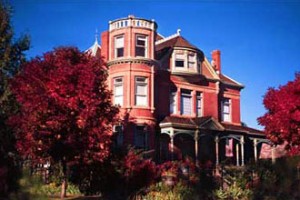 We did a little catching up on the DVR last night, and caught an episode of My Ghost Story that featured a segment on the Lumber Baron Inn, a Victorian-era mansion/B&B that we investigated back in early 2008. Sharon recognized the place immediately – I only saw it when a camera shot flashed past their sign in one of the early panning shots.

The place is a beautifully restored piece of Victorian architecture, complete with period furniture and photos of previous owners and their families. It has a palpable charm and, at night, that vague sense of eeriness that seems to easily attach itself to old buildings. The proprietor, Kevin, was quite convinced the place was haunted – shadows, voices, although nothing particularly scary. And, predictably, he reported a lot of activity coinciding with the renovations that he did on the place, which had fallen into disrepair before he purchased it the year before.

We had a fairly big group that evening – 8 or 10 people as I remember it – so we didn’t get much quiet time in the place, and all the glass and hardwood floors made for a lot of echoes. We also didn’t stay very late – as I recall, we broke up the investigation around 11PM.

We caught more or less nothing of note on night vision video and digital voice recordings. Posting a few snaps below of the place on standard – we’d like to think the first one, shot in the front parlor area, captures a “mist” gathering on the right side of the frame, but we dismissed it at the time. I still find it unconvincing – probably the effects of glare coming from the windows (it was still daylight outside, as you can see.) And the second one, shot in the third floor ballroom, does contain a couple of “orbs” (two in the lower left-hand corner, one in the upper right-hand corner)  but, well, we’re not big proponents of the orb thing.  Judge for yourself. 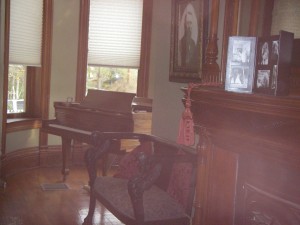 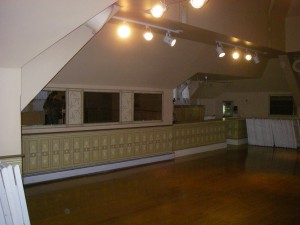 One Response to Lumber Baron Inn