Here’s the full report on the Pueblo Fire Museum investigation from 3 weeks ago:

Richard Estep contacted us regarding an investigation of the Pueblo Firefighters Museum, Hose Co #3. The investigation was a joint effort between Boulder County Paranormal Research Society, SpiritBear Paranormal and a couple of other paranormal investigation groups from the Boulder/Longmont/Denver metro area.

The Pueblo Fire Museum is housed in the original Hose Company #3 building located at 116 Broadway Ave in Pueblo, CO. According the facility’s website:

The building at this location is the only remaining firehouse in Pueblo that housed horse-drawn fire equipment, and one of two remaining that has the famous brass pole still intact. It was “home” to the valiant men who served with the distinguished Hose Company No. 3. The building was erected in 1881 and the last fire alarm was sounded on March 9, 1979.

The building continues its fire-related service to the community through the auspices of a fire museum. A wealth of information and pictures, as well as antique fire engines, hose carts, and other memorabilia will be on display.

The team included Richard, Joey, Kathleen, Kira and Seth from BCPRS, Dave and Sharon from SBP, Stephen and Cara from AAIP,  and Brada and Connie, both solo investigators.

Once the team had assembled, they were given a presentation by Mark Pickerel, Museum Curator and VP of the Pueblo Firefighters Historical Society. Mark provided some background on the city’s firefighting community, and related stories of unexplained events surrounding the building. These claims include:

-Handprint appearing on a pane window glass at the top of the stairs on the second floor, even after replacement of the glass in the window frame. This story relates back to the early 1960’s, with no reported recurrence since then.

-The operation of an antique firefighting vehicle without an operator; the vehicle started itself, made two 90 degree turns and one 45 degree turn from the back the building to the front on Broadway Avenue. This event took place about three years ago, and was witnessed by several local residents.

-Electrical devices fail or have their battery power inexplicably drained throughout the building, though primarily on the second floor.

-Persons have reported being touched inside the building.

The Pueblo Fire Department, Mark noted, was unusually fortunate in having suffered only three fatalities in the line of duty in its almost 130 year history – the city’s first fire chief, R.J. Krague, was killed when thrown from his horse in 1891, fireman Joseph Robida was killed when struck from behind riding Engine Company No. 4 in 1945, and fireman William A DeLong was killed in an auto accident responding to a call in 1949. There is some speculation as to whether the unexplained events at the museum may be related to one of these three men. There is also speculation it may be related to the story of a woman who brought a drowned child to the building sometime in the 1970’s.

Richard divided the investigations into three teams, and each team set off to cover baseline readings. From SBP, Sharon was assigned to Team 1, who covered the basement area initially, and Dave was assigned to Team 2, who did their initial baselining in the building’s first floor vehicle bay. Kathleen and Richard primarily remained in the second floor kitchen for the first part of the investigation.

On her own, Sharon also baselined the kitchen area using the Trifield, and returned readings of 3mg on the A, B and C walls, but a reading of 5mg at the doorway and 8mg further along the D wall. The readings suggest that the exterior power lines along the D wall are influencing the interior EMF readings.

Team 2’s initial baseline of the inside of the vehicle bay area revealed an extremely high level of EMF activity centered around the front of the structure, especially in the D-A corner, as shown below: 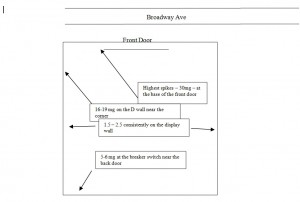 These readings are consistent with BCPRS’ earlier investigation of the structure. Note that large electrical junction boxes exist outside within 20 feet off the A-B corner of the building, and while they do not by themselves explain the high EMF readings inside the bay, it is worth noting that the entire A-wall on the first floor and B-wall on the second had high EMF readings.

Dave set up a static-shot digital camera (W30) in the bay area and captured 69 shots. Apart from a number of fairly traditional ‘orbs’, none were particularly enigmatic. One photo captured using the Pentax W90 in the bay area, shooting alongside the display wall, did yield one interesting image: 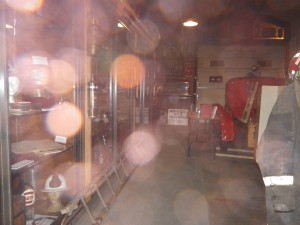 Nothing (fabric, fingers, objects, etc) was in front of the camera, and no other photos taken with either camera produced similar results, other than individual orbs in a fairly standard context. Interestingly, the Sony DCR-SR82 video camera was running and pointed in Dave’s direction at the time this photo was taken, showing nothing at head level in front of Dave at the time the photo was taken (although the still camera was out of view from the video camera.)

Nothing captured with the Nikon D5000 revealed anything enigmatic.

Sony DCR-SR82 – This camcorder was set up for several recording intervals with IR light assist, primarily centered around the D-A corner of the building. Nothing extraordinary was captured during these sessions. It was also used in the bedroom area after a spike of K2 readings later in the investigation (~0200), but no readings of note were captured during the video footage.

Sony HDR-XR200 – Nothing of note. At one point (approx 0130), Richard called for a video camera to capture high K2 readings (three lights) in the bedroom area. Because the camera was handheld and without IR light, it is somewhat blurry and difficult to ascertain context, hence the footage value is of questionable value. It is available in case anyone wants to make further review.

Approximately 90 minutes total of audio recordings were made.

Dave performed several auditory (EVP) periods during the investigation. The bay area was an extremely difficult place for auditory evidence gathering. During the evening, until about 0130, there was consistent background noise (stage music, voices, automobiles) as a result of the bar and liquor store operations across the street from the museum. After this time, Richard and Joey spent a considerable period conducting and discussing detailed EMF readings in the upstairs bedroom. Their voices carried easily down the fire-pole opening the bedroom floor directly into the glass-display case laden bay area.

Despite these challenges, two marginal Class C EVP’s were recorded, and offered without endorsement.

“evp evidence 1.mp3” – Recorded in the bay area during initial baseline. A cough is heard, two camera beeps, and what sounds like a disembodied ‘sigh’ may be heard at approximately 7.4 seconds into the selection. Confidence is low.

“evp evidence 2.mp3” – Recorded during Group 2 “quiet time” EVP test in the bay area, the entire selection excerpted is 17 seconds. At 6 seconds into the recording, a very faint sound lasting about 2 seconds like a whispered voice is heard at apparently very close proximity to the recording device, which was laid down on a display case by Dave, who then walked at least six feet from the recorder (per standard SBP practice). The end of the excerpt is the sound of Connie calling for response, and is included to demonstrate the reverb-chamber effect of vocal sound in that area. This anomaly does not seem indicate that effect.  Confidence is low.

-A SBP tripod failed upon the setup phase of the investigation. While not electrical in nature, it was oddly consistent with reports of paranormal investigation equipment failures in the past.

-Team 1 reported that a walkie-talkie battery drained explicably twice during the investigation, despite receiving full charges at the outset of the investigation. Also, Cara’s K-2 meter battery needed to be replaced.

-Connie reported that at approx 0145, while seated in the upstairs kitchen area, she felt the sensation of three footsteps approaching the back of her chair from the top of the stairs. No one was present at that time. When someone (Seth) did approach her chair later in the investigation, along the same path, she reported that it was the exact same sensation she felt earlier.

-Richard, Cara and Stephen performed some K-2 readings in the bedroom area, and at one point, Richard called for a video camera to record the readings, to which Dave responded. Indeed, Richard’s handheld K-2 meter was fully spiked for a period of time, lasting 6 or 7 minutes, while K-2 meters placed on the nearby bed registered a background reading of 1. After this duration, Richard’s K-2 meter returned to readings consistent with the meters on the bed, and no further K-2 anomalies were recorded.

The Hose Co #3 is a fascinating location and a well-maintained museum facility, run by caring and enthusiastic volunteers. The building itself is also located two buildings from an operational Pueblo mortuary, and there is some speculation as to whether or not this facility may be contributing to the museum’s unexplained phenomena. There is also a generally high level of background EMF probably caused by transformers located outside the A-D and the A-B corners of the building.

Our conclusion is that, if the building is subject to paranormal incursions, they are infrequent and somewhat subtle. SBP does not generally make judgments about whether a location is haunted.