Colorado Paranormal Convention 9/28/13 Interesting photo – what do you think? 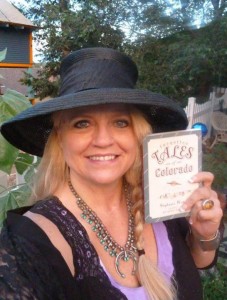 Stephanie Waters, and her latest book

Sorry we’re a little behind, but we wanted to get  a note in on Stephanie Waters’ second annual Spirits of Colorado Paranormal Convention, which was held in the mining/gambling town of Cripple Creek this year.

The day-long festival played to all things paranormal, including presentations on metaphysics, Sasquatch and space-related stuff. They also scheduled a zombie walk through the town, and a couple of late night activities, including a few scheduled tours through the reputedly-way-haunted old jail , which from our vantage point appeared to be one of the most popular events. 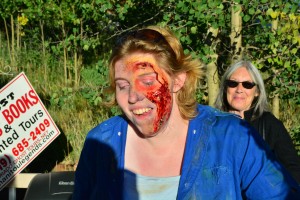 Zombie time (Sharon, who is NOT a zombie, in the background)

As we reported on FB, we were scheduled speakers at one of the three lecture rooms at 1PM, but the venue, the Cripple Creek Heritage Museum, is a few miles outside of town and attendance was…er, pretty light. The speaker ahead of us, Leon from the Pikes Peak paranormal group, did a good and reasonably attended talk on Sasquatch, and our friend Michelle from Full Moon Explorations   did one of three talks that afternoon on “Ghosthunting 101″ right after us, but we were sandwiched in between and we got zero signups for our probably badly titled “Taking a Skeptical Approach”. It’s all about marketing, dontcha know, and we learned our lesson. We’re working on it.

(In fairness, we were also up against “Travels Through the Fourth Dimension” and “So You Want To Be A Ghost Hunter” – if you had your choice, would you shell out five bucks for something called “Taking A Skeptical Approach” over either of those two presentations???)

But no problem –  we’re planning on serializing our spiel  and laying it out on these pages in the coming weeks. And yes, we’re working on a new title.

We asked Stephanie a little bit about how it went this year:

What I learned from last year is that I needed more management. I hired a couple of people to help me this year and I think that really helped. We started the event an hour later this year but still didn’t get busy until noon. I am thinking of starting at noon next year.

As for the three-location thing for the daily events, she said:

I know I need to be better organized for the evening events. We had the same problem last year. I think I need to have more going on. Maybe we should have a couple of people doing the seances as that seems to be a popular event. I also need to move the venues closer together. I gave you & last year’s peeps the biggest venue and then hardly anyone went to the Heritage Center. I honestly didn’t see that coming and feared the opposite might happen. Next year everything will be walking distance.

Live and learn – we’re looking forward to helping out with next year’s convention.

We did manage to get up to Mount Pisgah and shoot the cemetery again in the fading evening light. Nice cemetery.

And maybe the best part for us was staying at Ground Zero, the beautifully restored Hotel St Nicholas, high atop 3rd Street .. 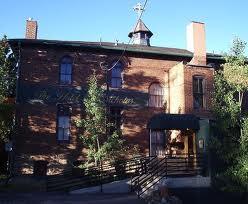 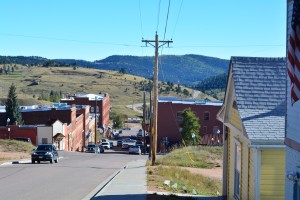 Reputedly haunted and a place I’ve wanted to investigate for years, the place was busy with conventioneers (as well as some lubed-up, late night commotion in the tiny first floor bar), so while we enjoyed our overnight stay, they weren’t the most ideal conditions for a quiet and contemplative investigation. We’ll get up there on our own before long.

It was a great weekend, perfect weather, and we even found time for a nice hike on the way home, at Mueller State Park, a nice expanse of glacial valleys and woodland tucked in behind Pike’s Peak. 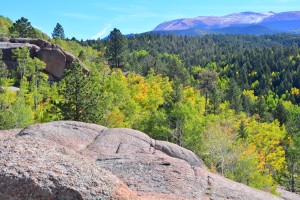 Anyway, more to come soon, including some interesting maybe-evidence we got while in England in August, and cemetery gallery updates. Stay tuned >