Spirits of Colorado Paranormal Convention The ghosts of York ?

Interesting photo – what do you think? 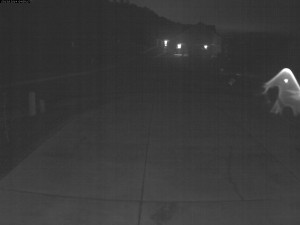 This photograph was sent to us by a reader a few days ago, who asked if we’d have a look and render an opinion. It was captured on an IR security cam outside his property (we’re withholding his name and location at his request…)

His girlfriend and some co-workers are a bit freaked out by it.

Now, our original take, after some review, is that it appears to be a drop of moisture on the camera lens, which loses its shape as it moves downward over the surface of the lens (convex, presumably). Normally a streaming video camera, the owner had some problems with his camera rig and set it to only capture stills, so this is the only frame he has of this anomaly. He reports no unusual activity at his house, so he has no reason to believe his place is haunted.

The one odd thing, in a follow-up email he sent us, is that he reports there is no sidewalk or yard light at this location, so the primary light source (the bright speck at the center of the veiled image) is itself a bit of a mystery.

What do you think?

2 Responses to Interesting photo – what do you think?