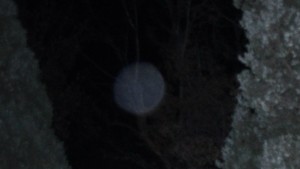 Our good friends at Past Hauntings in Nottingham, UK linked this article a week or two ago, from one of England’s national newspapers. It tells the story of Professor Klaus Heinemann, a research scientist at NASA, who has taken up the much belabored cause of ‘orbs’ as (possible) evidence of spirit activity. It’s a lengthy piece, but whichever side of the argument you happen to fall on, we’d encourage you to read it.

Now, a common rhetorical defense folks like us in this field use to combat the dismissive critic is to say “you should have an open mind,” and we try very hard to follow that in both our views on the paranormal and in our investigations. In some ways, we would humbly submit that our own minds may be more open than most paranormal troopers, since we are open to the possibility that there are no such thing as ghosts or spirits, but intend to be persuaded only by evidence. (And in case it matters, we kind of believe there are, based on our investigations and a few personal experiences….belief, in our view is a sliding-scale condition, not necessarily a binary one.)

But one thing we’re pretty sure about is that orbs – the garden variety, floating-inexplicably, two-dimensional, shadowless, invisible to the unaided eye, flash-only recorded ones, anyway – are not evidence of spirit activity, but merely particulate (dust, water droplets, pollen, insects) matter reflecting camera flash light too close to be focused upon by consumer-grade digital cameras.

We’ve come to believe this via a number of convincing-to-us pathways of evidence – non-flash pictures very rarely show them, they do not cast shadows, they tend to appear under humid or very dusty conditions, they seldom have any tightly-correlated activity associated with them (no, just being in an allegedly haunted house doesn’t count), they are never captured by two different cameras from two different vantage points simultaneously. 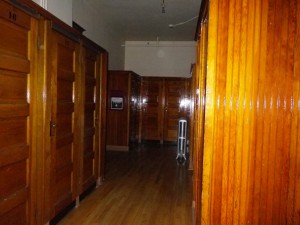 We also believe – as harsh as this may sound – that the vast populations of ghost hunting teams out there have a vested interest in promoting orbs as spirit activity to validate their own work and please their Facebook followers and their clientele. (And before you throw a rock, yes, we do publish orb photos when we report on investigations in these pages. We do NOT endorse them as evidence of spirit activity, though, and usually say so explicitly.

In preparing a lecture last fall for a local paranormal convention, we came across a neat, succinct diagram of the optical mechanism by which orbs appear on digital images: 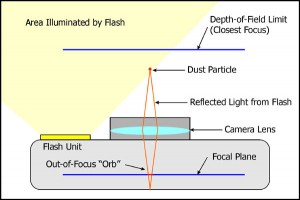 It’s all about the focal plane.

We’ll allow that this process may be responsible for only a subset of orb images, although to be honest, we’ve seldom come across a case where this elegant and perfectly reasonable explanation  just couldn’t work. There’s more to it than just this, of course, as you have to account for lenses, directional flashes, etc. But sorry, folks, you’d need a pretty strong case to shoot this down, and we’ve yet to encounter one.

As for the article, though, we have a number of complaints about it, but we want to focus on one particular passage:

Heinemann also found that during his numerous dual camera experiments, when he used twin cameras to capture an object from two different angles, a single orb shape would often appear – but only in one of the two images taken simultaneously.

It was as if the orbs somehow chose which camera to appear on, or whether to appear at all.

This reminded us of a study we linked to a couple of years back where the Society for Psychical Research did an exhaustive study on orb photography and – gadzooks – found exactly the same thing that Professor Heinemann did. In two camera studies, orbs almost never appeared in two cameras simultaneously, and when they did, they appeared in different places.

But the conclusion one draws isn’t that “the orbs somehow chose which camera to appear on, or whether to appear at all,”, but that the artifact creating the image was closely in front of one lens, and (obviously) not the other.

This is a pretty potent example, in our view, how even latent belief can lead an otherwise rigorously careful mind into flirting with the fantastic and dismissing the mundane and rational. Orbs choosing which camera to appear in ? Really ??? 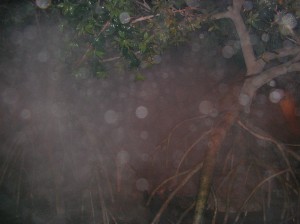 Lastly, our favorite orbs-are-not-ghosts example comes from our own experience, in the ridiculously humid Rainforest Exhibit of the Cleveland Zoo, way back in 2005.

Perhaps the good Professor would have us believe that this is the most haunted zoo in the universe.