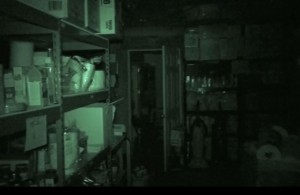 We did an investigation a few weeks back with our friends from Full Moon Explorations at a family support center in the Front Range area (the folks who work there preferred we NOT name the location, so we won’t.) They indicated some reports of shadow figures, voices and inexplicable cooking aromas, centered primarily around the basement. Several of the employees there feel decidedly uncomfortable in the basement – one or two won’t go down there alone, ever.

The building itself has a somewhat interesting past; originally built as apartments  (probably in the 30′s or 40′s), the stone building was actually moved sometime in the late 50′s, fairly surprising given the girth of the building and the fact that it was made almost entirely of large bricks. The building had been converted to this family counseling center in the late 1970′s.

While we don’t usually put too much credence in non-specific observations of mediums, we did find it interesting that they indicated some sort of presence without being told ahead of time that the folks who work there also sensed something, and further that the presence was not associated with the building, but with the land itself. 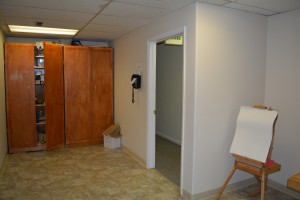 As for me, I do not consider myself a “sensitive” in any way (a lot of paranormal researchers do, for whatever that’s worth), but during my initial walkthrough of the basement, I did get a little sensation passing through one of the hallway thresholds. It was a non-intuitive little passage between two sections of the basement, with a couple of funny angles in the building construction, and maybe it was just that…but the worker whose office (we call it their ‘therapy room’) was right next to that threshold indicated that she believed this was the most active part of the basement.

She indicated she often felt that someone was just out of sight outside her office, essentially in  the same hallway threshold. She told me this after my walkthrough; I found that an interesting coincidence, and we spent a good part of the evening investigating in that room. I did tell her that weird angles, low ceilings and otherwise non-intuitive spaces in buildings can produce feelings of claustrophobia and unease, and we tried to keep that in mind when we investigated in the nearby office.

As for visual evidence, we ran a static IR video camera in two locations – probably 3 hours total – and I set a static digital camera at the far end of the basement. Nothing of note in any of the imagery from either device. 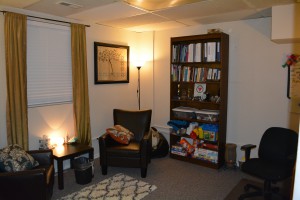 We did, however, capture a number of interesting EVP’s:

This was captured in the ‘therapy room’ – inexplicable voice at the 4-5 second mark. Listen carefully.

Also captured in the ‘therapy room’ , at the 5 second mark.

This voice, which seems to say a name (we won’t indicate what WE think it says), was captured early in the evening, while Michelle from FME was setting up her video system. 5 second mark you may need to turn this up a bit on the computer:

Finally, this voice seems to say…we’ll let you decide, if the title doesn’t give it away….this one is subtle and very fast; check out the 1.5-2.5 sec section of this recording.

The place didn’t feel particularly beset with spirit activity – it is, after all, a working counseling center, with offices, a pantry brimming with toys and food supplies, and decidedly normal vestiges of an operational space. But that how it works sometimes – you don’t need a derelict old building to find inexplicata.

Is this place haunted? The EVP’s are indeed interesting.