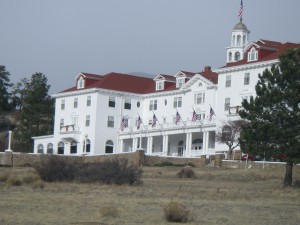 The Stanley Hotel, from our investigation there in 2008

One of our FB friends linked a few weeks back to this para-listicle about America’s most haunted hotels. We normally don’t read these, since they’re usually intended to promote some book or some group someplace, but this one caught our eye since we had actually investigated two of these places – the (in)famous Stanley Hotel, in Estes Park, CO, and the St. James in Cimarron, NM.

OK, fair enough, so we read the piece (at least the sections on these two hotels) and we posted a lengthy comment about both of them. Just so you know, we weren’t nasty or vulgar: here was our response to the post:

My wife and I have investigated at the Stanley (twice) and the St J, as well as a few other reputedly haunted hotels not on your list. All three investigations yielded not a single bit of compelling evidence. The staff had the Stanley had a few interesting stories to tell, and we got a few ‘orbs’, but that’s all. The first time we stayed in the famously haunted room, investigated most of the night, and zip. This was a few years before the Stanley turned their haunted reputation into a mini-concession – exhibits, charging for investigative teams, paid onsite mediums (really ???), paranormal conventions with TV personalities, etc. The place is a carnival now.

The St J was also a complete bust, although in fairness it was  Saturday night and there was a lot of noise coming from the bar. We asked a few staff there for stories, none had any. It’s a great old Victorian building and a nice place to stay, but its reputation appears much scarier than the reality, at least in our experience. They do have fake bullet holes in the dining room ceiling, to ‘mimic’ the bullet holes from the late 19th century that were plastered over or removed years ago.

I do accept that a reputation for being haunted is great for business these days, and I don’t begrudge any hospitality business trying to drum up paying customers. But in our experience, actually looking for the real thing is quite different from enjoying a good ghost story.

Doesn’t make for particularly fun copy, does it?

That wasn’t too nasty, was it? Well, the webmaster there evidently thought so, because the comment got whacked by the administrator and didn’t appear below the story. I guess any feedback that scrapes against the legend, even if it was based on firsthand experience, is rather dimly regarded.

The author of the piece is named Troy Taylor – I am unfamiliar with him and his work – but his bio describes him thusly: “Troy Taylor is the author of more than 100 books on ghosts, hauntings, crime and the unexplained in America. He is also the owner of American Hauntings, one of the oldest haunted history websites on the internet. He is also the owner of a publishing company, eight ghost and crime tour companies and has appeared in numerous books, magazines, television shows, documentaries and one feature film about the supernatural.

Perhaps that explains it, then.